The Justice Department has charged companies in China and Taiwan and three individuals with stealing trade secrets from a U.S. semi-conductor company. (Nov. 1)
AP 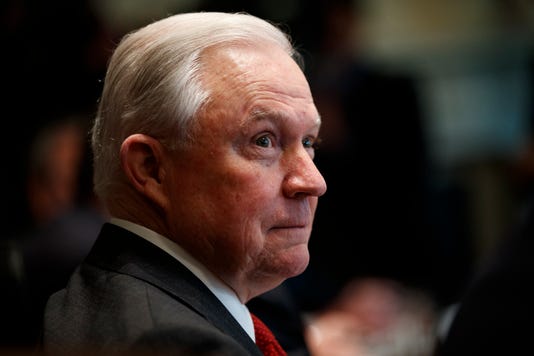 The foreign entities and suspects were accused in an alleged conspiracy to steal  research and technology used to manufacture a leading memory storage product known as dynamic random-access memory or DRAM, valued at $8.7 billion.

One of the individuals charged, Stephen Chen, once served as president of a firm acquired by Micron in 2013 and later moved to the charged Taiwanese firm United Microelectronics Corp., “from where he is alleged to have orchestrated the theft of trade secrets from Micron,” Attorney General Jeff Sessions said.

The attorney general said Chen then allegedly partnered with the state-owned Chinese firm, Fujian Jinhua Integrated Circuit Co., so that China could obtain the information and use it for unlawful advantage in the marketplace.

“This is a brazen scheme,” Sessions said, adding that the Justice Department also had filed a separate civil action in an attempt to block the Chinese and Taiwan companies from transferring the stolen technology or exporting related products to the United States.

“We are not just reacting to crimes,” Sessions said. “We are acting to block the defendants from doing any more harm to Micron.

The case represented the latest in a series of enforcement actions taken against Chinese interests, as the Trump administration stepped up its efforts against the increasing threat posed by intellectual property theft.

The alleged scheme ran from January 2010 to May 2015 and targeted a turbofan engine developed through a partnership between an unnamed French manufacturer and U.S. companies. The alleged crime coincided with a Chinese state-owned company working to develop a comparable engine, the department said.

That case followed an Oct. 10 announcement that a Chinese intelligence officer was extradited to Ohio to face charges of attempting to steal trade secrets related to aircraft engines. And on Sept. 25, an Illinois grand jury indicted a U.S. Army recruit Ji Chaoqun who was accused of working as an agent for Chinese intelligence.

“We are here today to say: enough is enough,” Sessions said. “We’re not going to take it anymore. It’s time for China to join the community of lawful nations. International trade has been good for China, but the cheating must stop.”

The attorney general said he was creating a new “China Initiative” that would seek to identify trade theft cases involving the country and ensure that sufficient resources were applied to prosecute them.

Assistant Attorney General John Demers, chief of Justice’s National Security Division, said China was engaged in “systematically stealing our nation’s intellectual property for the benefit of their own companies.”

He said the separate civil action taken to block the export of products linked to the stolen Micron technology, the first time the U.S., has employed such a strategy.